What would the world look like if all species had the same rights and liberties as citizens in Western Europe?

Reflecting on the change to society that universal suffrage created in the 20th century, this fictional scenario asks participants to play as different species and vote for a world that they would like to live in. In doing so we ask audiences on topics ranging from climate change to rights and liberties to explore the fundamentals on which society is built, and reflect on the contemporary world that we inhabit.

This workshop has been developed to work remotely or in a physical space, dependent on Covid restrictions. So far this workshop has taken place in different institutions and independent organisations such as Antiuniversity Festival 2020, Residency 11:11 and the University of the West of England (UWE), BA Hons Graphic Design Program.

Poster and article published in the special issue #36 Coexist designed and published by Slanted Magazine team.

Within this context set by the Slanted team, and being published among other 450 creatives, our fictional scenario was pushed a bit further for this issue where we took our questions a bit further to interrogate other political realities.

For this article we reflected on coexistence and this quote by John Berger ‘The animal has secrets which, unlike the secrets of caves, mountains, seas are specifically addressed to man’. By going beyond the human focus of contemporary politics, we wish to see how we can best coexist with the lives of others on this shared planet.

Looking at how democracy as we know it could involve other species by enfranchising animals and plants with the right to vote, this project investigates the values of emancipation within the Climate Crisis context.

The world map reflects on ecosystems rather than national borders, forming eco constituencies, accompanied by political manifestos of five different parties that are ideologically informed by their environmental context rather than anthropocentric.

While monetising the labour of nature and its resources this project poses other questions central to current debates such as property, food production, species rights, human history, etc. This speculative scenario not only reflects on the ecological crisis and lack of conversation about our impact, but highlights the general absence of ideological debate in the UK political system and the merits of certain ideas. 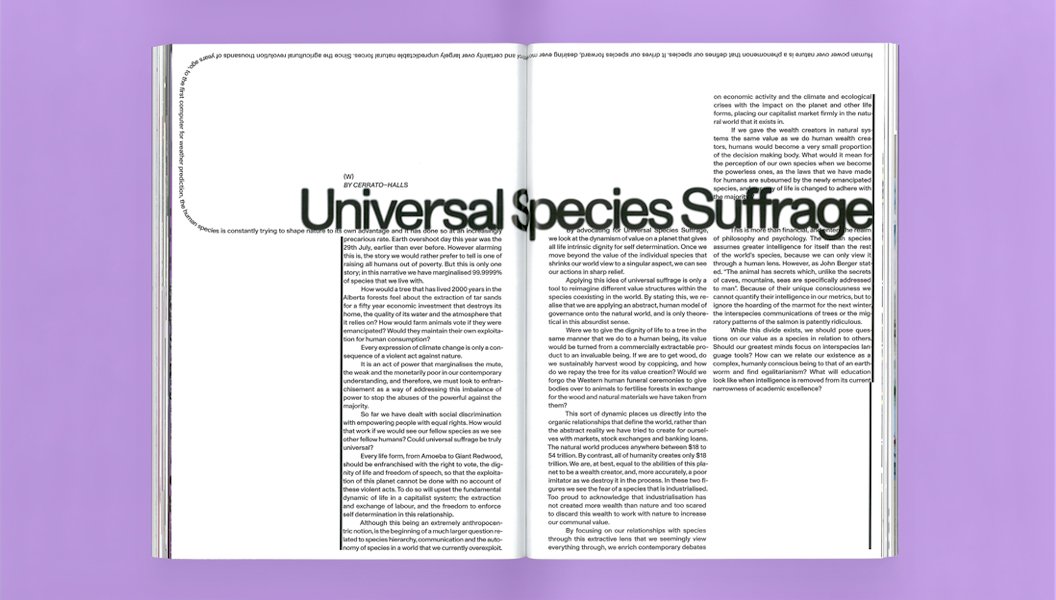 Written for Blank magazine’s ‘Crisis’ edition, this article questions how we can respond to the climate, environmental, economic and social injustices of our time by looking at what the structures of our society rest upon.

Looking towards the idea of Universal Species Suffrage, we explore some of the implications of giving species similar rights to our own in Western Europe. By questioning these fundamentals, we hope to broaden out the discussion taking place around elections to question why we vote, and to what end beyond the narrow implications of party policy on our particular household.

This publication was designed by Blank Publication.

Article written for Schlosspost in response to their theme ‘Soft Power’. Concerned by the dislocation inherent in work during the digital revolution and the threat this faces to the power of collective action, this article explores the context of our collective spaces and questions how we can begin creating new ones.

Utilising art as a means of subverting space, we propose a radical platform of artistic interventions in response to a world made steadily faster by the encroachment of digital platforms and the physical privatisation of space.

Within this article we expand on how to create these spaces and to what end they serve, offering a pathway forward for art as a soft power in the contemporary world.

Through the deployment of a ‘DO nothing’ signpost, Cerrato and Halls draw on the historical purpose of a signpost as a means of orientation, a meeting place and a mean of communication. In our accelerating world, we don’t have time to reflect.

The artists have created a ‘DO nothing’ space that challenges this: that allows people to stop, to orient themselves with their own future and thoughts. While ‘DO nothing’ implies passivity, in fact the idea of actively pursuing doing nothing, requires the individual to act contrary to the contemporary standard.

This publication explores the standardisation of human-made systems and the conformity built into even the most mundane objects.

The booklet consists of a manifesto for the expanded front cover, declaring our message in a singular text. Meanwhile, a visual narrative explores a singular notion which is deconstructed and reimagined both verbally and literally through a series of images and text.

The structure constructed in the space in contrast to weight of the plastic created a tension in the space. This gallery space was located at the entrance of the building.

REDTAPE is a Visual Communication student led-forum that organises events and panel discussions in order to question the role of the creative practitioner as an ‘agent’, examining proponents and bringing an external view to the current topics touched on our course. The main events have focused on culture, ethics and technology.